The latest S&P Dow Jones Indices (S&P DJI) for May 2022, a measure of US house prices, show that house prices continue to rise in the United States, as the NSA S&P CoreLogic Case-Shiller National House Price Index in the United Statesspanning all nine U.S. census divisions, posted a 19.7% annual gain in May, down slightly from 20.6% the previous month.

Regionally, Tampa, Miami and Dallas had the highest year-over-year gains among the 20 cities in May. Tampa led the way with a 36.1% year-over-year price increase, followed by Miami with a 34% increase and Dallas with a 30.8% increase. Four of the 20 cities reported higher price increases in the year ending May 2022 compared to the year ending April 2022.

“Housing data for May 2022 remained strong, as price gains moderated slightly from very high levels,” said Craig J. Lazzara, CEO of S&P DJI. The National Composite Index rose 19.7% for the 12 months to May, down from the 20.6% year-over-year gain in April. We see a similar trend in the 10-city composite index (up 19% in May versus 19.6% in April) and in the 20-city composite index (+20.5% versus +21.2%). Despite this deceleration, growth rates are still extremely robust, with all three composites historically at or above the 98th percentile. 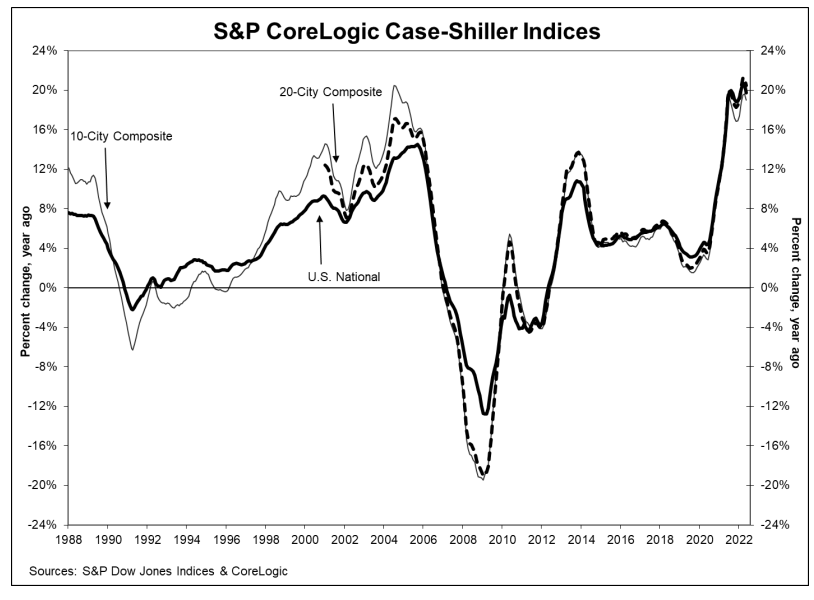 “Today’s S&P CoreLogic Case Shiller Index underscores a housing market grappling with a growing affordability crisis,” added Realtor.com Head of Economic Research George Ratiu. “While growth slowed slightly in May from the strong pace of the previous two months, still tight inventories kept pressure on prices, pushing them up 19.7% from a year ago. The 10 and 20 city indices rose 19.6% and 20.5%, respectively, with only 4 of the 20 cities in the index recording higher annual advances in the month, seven less than last month. , with Tampa, Miami and Dallas posting the largest price increases.

The measures taken by the Fed in mid-June to fight inflation led the Federal Reserve to raise the nominal interest rate to 1.50-1.75%, an increase of 75 basis points compared to at the previous rate of 0.75-1.00%. The rate hike was cited as a necessity to tackle the highest rate of inflation since the 1980s.

“We previously noted that mortgage financing has become more expensive as the Federal Reserve raises interest rates, a process that was underway when our May data was collected,” Lazzara said. “As a result, a more challenging macroeconomic environment may not support extraordinary house price growth for much longer.”

The byproduct of all of this has been an increase in the nation’s housing inventory, providing more choice for buyers who were recently crippled for options in today’s market.

“Property markets are clearly moving towards a new equilibrium as higher interest rates cool buyer demand and high prices incentivize owners to put their properties up for sale,” Ratiu added. “In the short term, transactions are under pressure, with existing home sales falling for five straight months. Plus, with less competition, homes that would have flew off the market in hours last year are lingering. The share of homes with falling prices has doubled from a year ago as motivated homeowners want to get a deal done before more buyers leave the market.

Text size Artwork by Rob Dobi About the Author: Carmen M. Reinhart is Senior Vice President and Chief Economist of the World Bank Group. The global economy faces a combination of challenges rarely seen before, and Russia’s war on Ukraine adds a host of new risks to pre-existing ones created or exacerbated by a once-a-century […]

Alcoa (NYSE: AA – Get a rating) had its price target lowered by BMO Capital Markets from $57.00 to $55.00 in a report released Thursday morning, Fly reports. A number of other stock analysts have also recently released reports on AA. Goldman Sachs Group cut its price target on Alcoa shares from $104.00 to $90.00 […]